I remember waking up the first morning in the Shepherd Center ICU. I was still halfway under my morphine high so I started noticing designs and animals drawn up on the ceiling. I thought it was really nice for them to give us something to look at (after the morphine however, I noticed that the ceiling was just randomly speckled :). I didn't feel bad or anything. I was just trying to figure out what had happened to me. I noticed the ventilator tube coming out of my throat, I couldn't talk, there was something stuck down my nose., and of course I couldn't move. I don't remember any of this bothering me yet. I just wanted to know where my mom was.

For the entire week I was in ICU my mom came every day. As the week went on and the drugs wore off the more difficult it became to deal with the new circumstances of my life. I can't stress enough how much shock and disbelief I was in. It was like a horrible dream that you always expect to wake up from. Little did I know this time the nightmare would not go away.

The first month was, by far, the worst for me emotionally. It seemed like everything was taken away from me. It was worse than the most extreme punishment... and it was permanent. I lost my job, car, old room, every material thing such as surfboard, guitars, juggling balls, bicycle, etc., and all my independence. Basically all my aspired dreams as an adult were shattered. All my rights as a human seemed to be taken away. I remember thinking, "Why did I try so hard in life just for this to happen to me?" "Why did I exercise so much just to never move again?" "WHY DID THIS HAPPEN TO ME?"

Another prominent question I found myself asking was "what if." It was like some foolish attempt to find a way out of this disaster. "What if I had done a cannonball?" "What if I had just left the party?" "What if I never worked at Subway (I would have never met the friends I went to the party with)?" The questions were endless and obviously they never helped the situation.

In addition to the denial and the "what ifs", I found myself wondering what I had done to deserve this suffering. I began searching for anything possible that may have angered God. I was never more remorseful for even the most insignificant wrongdoings than I was then. I promised God I would be as perfect as humanly possible if He would just give me another chance. (This was just how I thought in the beginning. I didn't really believe there was a God. I just thought if there was, maybe He could help me. Eventually I went back to my old nonbelieving ways.)

The final example of my attempts to escape reality involves muscle/movement regain. At first I COMPLETELY believed I was going to get more movement back. Walking wasn't my greatest concern, but there was hardly a doubt in my mind that I would regain movement of my arms. Perhaps I was in more denial, or perhaps this was the only glimmer of hope I had left to hold on to. I could not wait for the day I would be able to take care of all my personal needs, juggle, or just give someone a hug. But obviously waiting was all I did.

When I wasn't searching for a way out, I had no choice but to try to accept the possibility that I may never move again. This was undoubtedly the hardest phase I had to go through. It was incredibly depressing having to say goodbye to all I've ever known. My brother placed pictures all around my room and I would stare at them all day and cry. As much as I did not want to believe this happened, there was no way around it.

(Just as a sidenote, I'd like to point out that I wasn't a complete emotional basket case 24/7. (Did I have you fooled? :) I was usually only sad when I was alone. There were actually many instances where my crazy personality would poke its head out. I owe all the happiness I had to the MANY MANY wonderful people that helped me along the way. Family was by my side from the beginning, friends were always coming to visit me (despite the seven-hour drive), and all those who couldn't reach me directly helped me in any way they could (such as fund-raising, sending cards, and in some cases... sending pizza and chocolate :) I could not have gotten through this without everyone's help.)

About three or four weeks after injury. 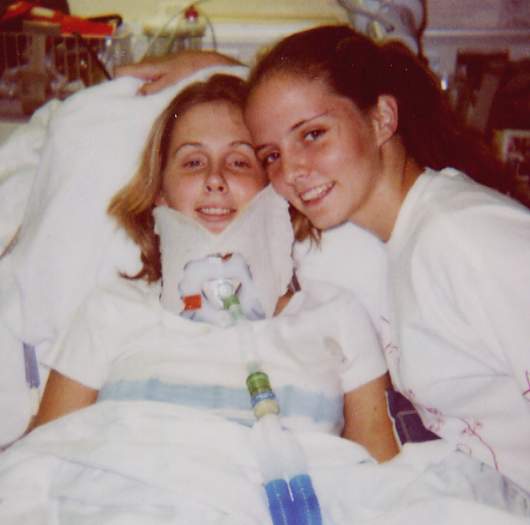 Look I could still smile =)